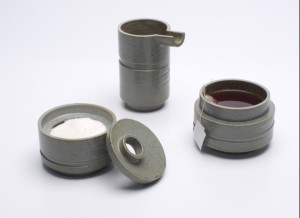 Duble walled tea set | Some pieces of the set are made by a double walled solution and are wheel formed. The form consist of an inside and outside wall, which touches each other only where the construction requires. This ensures that the object does not toast fully. The sculptural surface appearing on the wall conduce to the comfortable touchableness, and beside this it constitutes a low-key rhythmical pattern too. To the simple design I paired a layer sensible glaze, which produces different colours in different thickness.